Pit Nine, the massive mine is the stronghold of the Union. Before the Crash some of the local workers were collaborating in the dark to unionize to fight against the harsh working conditions. When the Crash hit this existing cabal managed to gain control over the mine. These men and women eventually formed the core for the Union of the Five Fingers. Now most people live on the houses and hovels on the slopes of the giant hole. Work is still done in the mine, mostly by hand. The giant crane has become inoperable and is now the seat of the important and powerful. 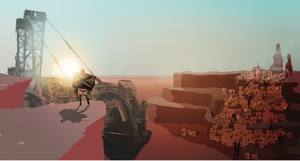 Pit Nine offers a place to recruit, a market and 4 special locations.