The Tower is a Class in Nowhere Prophet. For the enemy, see The Tower (boss).

Strong and stoic, the tower can take a lot of punishment. He can shield his sworn brotherhood from harm and patch them together afterwards. As a counterpoint to the thrill of combat many prefer ascetic lifestyles. Resilient and tough, the Tower can take a lot of punishment. Afflicted with the Jahahit parasite of the Blue Devils, he has worked for them a long time. Even though he's still regularly wracked by pain, he has become accustomed to it. Now he has dedicated his life to helping others. Here he can make good use of his medical knowledge and his technopathic sense for pain. 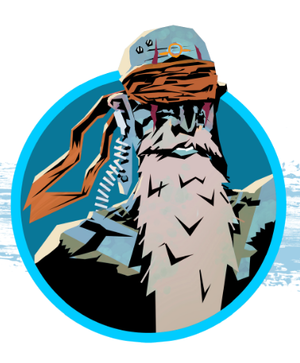 Listen to the tales of the Grim Ribbon to find and convince this operator to join your side.

The Tower requires a very specific event chain involving the Grim Ribbon. This event has a chance to spawn in Desert, Mountains, or Swamp terrain, where you encounter Bandits, Blue Devils, Five-Finger Union or Shiram Monks. It is likely limited to difficult terrain, and will only happen after the first map. It starts with a random event where you encounter a small group of haggard people led by a woman in a blue saree. Ask her "What happened to you?" and keep inquiring until you can "Ask for the route to their home." The quest node Grim Ribbon Outbreak will then be added to your map.

At the quest node, fight The Tower (boss). Do not kill him, but rather weaken him enough, let him surrender, then accept (say you're not here for his batteries) and refuse all payment until you’ve entered the settlement.

When leveling up or learning from a teacher from this class, your card options are drawn from the following pool.